The conference takes place in the historic private town-house "Dat Hoghehus" (Koberg 2, 23552 Lübeck) which is located in Lübeck's old town.

"Dat Hoghehus" is the biggest preserved medieval private town-house in Lübeck. The estate on which it stands was first mentioned in documents in 1307. It belongs to a small number of very large estates (called "Kurien") created around 1200. The first Romanesque building was constructed in 1216 while the side wing with the big hall was built after the great fire of Lübeck in 1276. It is assumed that from 1226 on it was the seat of the imperial Vogt of Lübeck - therefore or because of its size the house got its name ("dat hoghe hus" means "the high house" in medieval German). In 1796 a classicistic facade was added to the brick-made semi-detached house. The facade gives the house its present-day appearance and hides its real age.

The Chamber of Commerce ("Industrie- und Handelskammer", abbr.: IHK) of Lübeck bought the property in 1979 and uses it as a site for training courses and other events. For further information about the building see the corresponding website about "Dat Hoghehus" on the IHK's homepage. The website also includes a map to the building.

Getting there by bus

From the central bus terminal ("ZOB") take any of the following lines to bus stop "Koberg":


"Dat Hoghehus" is located on the north-west edge of the big market place at which the bus stop "Koberg" is.

Bus schedules can be found on the homepage of the city traffic company of Lübeck. Bus tickets are available from the driver or from the central bus terminal ticket office. The fare is EUR 1.60.

Lübeck is located approximately 60km northeast of Hamburg in Northern Germany. It is 10km away from the southernmost tip of the Baltic Sea to which Lübeck is connected by the river Trave. For any touristic information about Lübeck as well as hotel booking, please consult Lübeck Tourism.

After several unsuccessful settlements in the region, Lübeck was finally founded in 1159 by Henry the Lion, Duke of Brunswick, on a peninsula between the rivers Trave and Wakenitz. Offering a perfect place for settlement, easily defendable on an almost complete island between the two rivers and with a reliable connection to the open sea, the city flourished quickly. As early as 1170 - 1180 construction of the three main churches, the Cathedral, St. Mary's and St. Peter's, started. In 1226 Lübeck was granted the privilege of a Free City of the German Empire by Kaiser Frederick II, a status which the city maintained for more than 700 years until 1937.

Around 1300 Lübeck became the leader of the Hanseatic League of Cities, an organisation of merchants created for the purpose of self-protection. Lübeck's merchants maintained contacts reaching from the Orient to Venice all the way to Russia. The League set up branches in the most important cities - Peterhof in Novgorod, Stalhof in London, Deutsche Brücke in Bergen and Haus der Osterlinge in Brügge. In the Middle Age, Lübeck was one of the richest and largest cities of the German Empire.

Realizing that the river Trave towards the Baltic Sea was Lübeck's lifeline and source of wealth, the city bought the entire river, its western shore and its mouth in 1329. During the years of the German division from 1945 to 1989 when the city limits were the border between East and West Germany this medieval contract had the peculiar impact that the entire river with all its bays and banks belonged to the Western World while its Eastern beaches belonged to Eastern World with the tidal waterline marking the true border.

To the present day Travemünde ("mouth of Trave") and all the villages in between belong to the city of Lübeck. Today Travemünde calls itself Lübeck's most beautiful daughter; it is a busy ferry port with connections all over the Baltic Sea and Germany's second oldest sea bath with a long sandy beach attracting tourists for more than 200 years.

With the discovery of the Americas and the sea routes to India and China commerce on the Baltic Sea declined and so did the power of the Hanseatic League and its cities. In 1669 nine cities of the German Hanseatic League met for the last time in Lübeck, but Bremen, Hamburg, Lübeck, Wismar, Rostock, Stralsund, and Greifswald have carried on the legacy of the Hanseatic League into the 21st century by officially calling themselves "Hanseatic Cities" to the present day. However, only Bremen and Hamburg have managed to remain free cities as independent states in the German Federation. Have a look at the car's license plates: they show "HL" for "Hanseatic City of Lübeck". 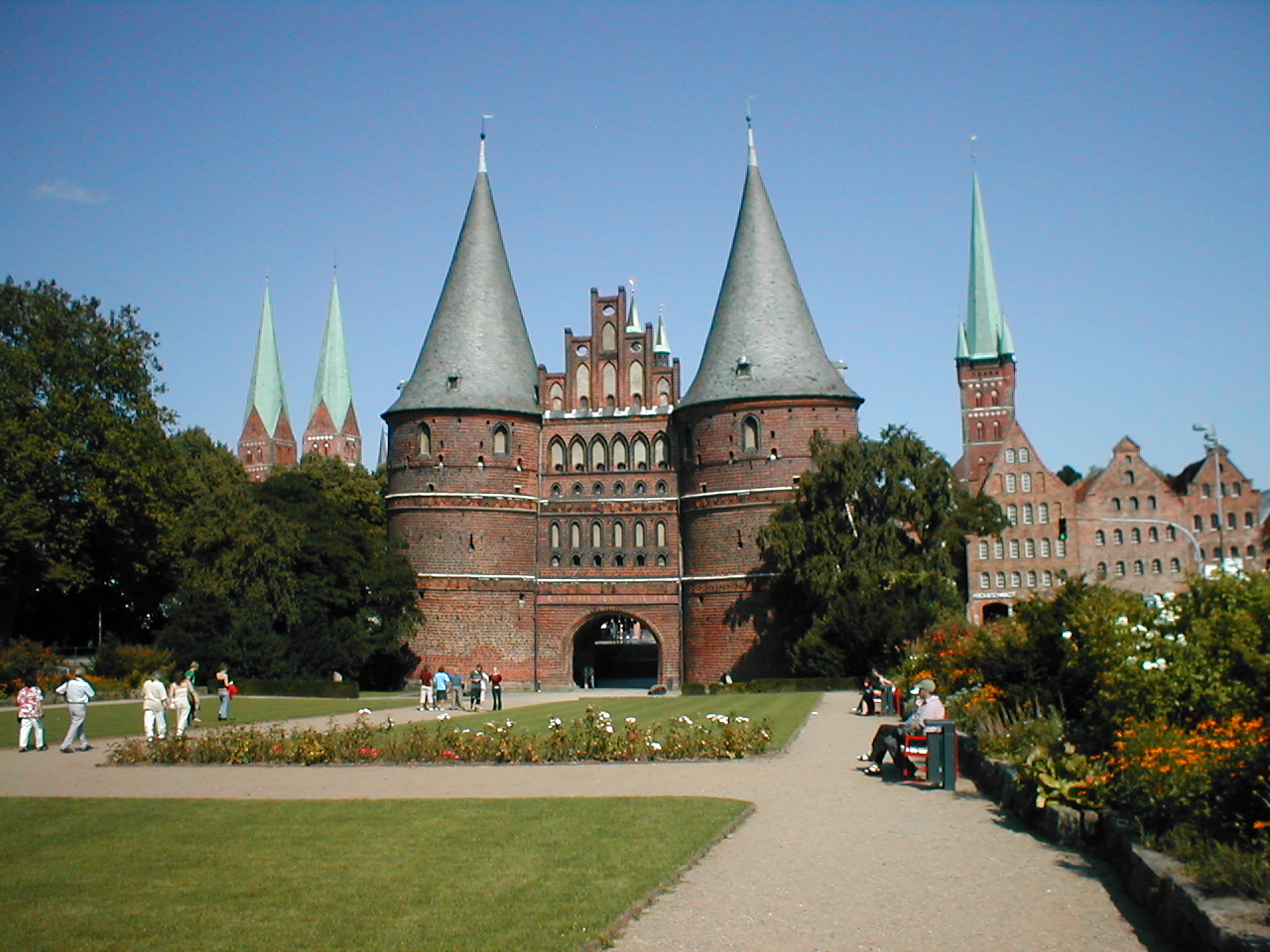 Today, Lübeck is a lively city of 215,000 people with a (small) university, a (larger) college ("Fachhochschule") and the state college of music. While Kiel is the capital of the state of Schleswig-Holstein, Lübeck defines itself as the cultural capital with frequent concerts, theatre performances, the traditional opening concert of the Schleswig-Holstein Music Festival, the Nordic Film Days, etc.

Three Nobel Prize laureates have spent parts of their life in Lübeck. Thomas Mann was born in Lübeck in 1875, where he spent childhood and youth. In 1929 he received the Nobel Prize for Literature for his novel "Die Buddenbrooks", the history of a Lübeck merchant family. Look for the Buddenbrookhaus in Mengstrße. Willy Brandt was born as Herbert Frahm in Lübeck in 1913. (Willy Brandt was his alias name.) He spent his childhood and youth in the city before he went into Norwegian exile in 1933. In 1971, the later German Chancellor received the Nobel Peace Prize. Born in Danzig in 1927, Günter Grass today lives and works in Lübeck. He received the Nobel Prize for Literature in 1999 for his life's work. Look for the Günter-Grass-Haus in Glockengießerstraße.

Despite severe destructions during the war, Lübeck in many areas of the old town island has preserved its medieval face with half-timbered houses and narrow cobble stone streets below the towers of its 800 year old churches. In 1987, parts of Lübeck's old town were declared a UNESCO World Cultural Heritage.

Apart from old stones and modern culture, Lübeck is also famous for being the "marzipan capital" of Germany. Don't miss to try these sweets when you come to Lübeck. Café Niederegger in Breite Straße is the most famous manufacturer, where you can buy marzipan in the most unsual forms.